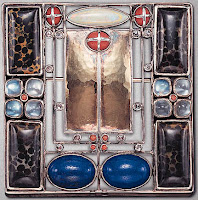 Lili Hellmann Waerndorfer (b. Vienna, 29. September 1874 - d. Nyack, California, May 1952) was an unconventional woman who deserves to be better remembered.  Not so much for her enlightened art patronage as for her willingness to try new things, even in trying circumstances she could hardly have imagined in her youth.    One of the first women in Austria to obtain a driver's license, Lili enjoyed racing in her car.  This beautiful brooch in  diamonds, opal, moonstone, and lapis lazuli was designed for her by Josef Hoffmann in 1904. and was likely worn on one of the stylish new 'reform' dresses that women like Ditha Moser, Sonja Knips, and Emilie Floge donned.   Lili Hellmann married  Fritz Waerndorfer in 1895; the couple had one son, Karl.    Later when their fortunes were gone, Lili not only moved to a new continent but wrote and published at least one mystery novel - The End Of The Honeymoon - in 1914.

Friedrich Waerndorfer (b. Vienna, 1868 - d. Bryn Mawr, Pennsylvania, 1939), nicknamed Fritz, was a  Großindustrieller, a wealthy industrialist who also became an important art patron.   The son of a successful Jewish textile manufacturer, the young Waerndorfer was sent to England in the 1880s to study the methods used in British textile factories.  He also spent  alot of time in London's museums and became friendly with the Scottish designer Charles Rennie Mackintosh. 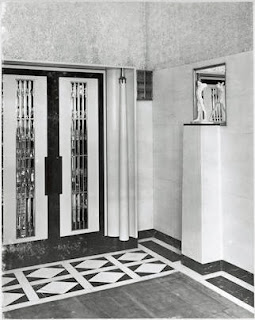 Back in Vienna, Fritz Waerndorfer married Lili Hellmann in 1895.   The pairing was unusual:  Fritz was still in his twenties, a young age for a man to marry but Waerndorfer was already a succesful businessman,  and Lili was only six years his junior.  The conventional marital pattern for upper class Viennese was  like that of the marriage of Koloman Moser, who  at 34 wed the 19 year-old Editha Mautner- von Markhof.
Through the critic Hermann Bahr the Waerndorfers were introduced to  members of the Vienna Secession around 1900 and when the Wiener Werkstatte was organized in 1903, the group turned to Waerndorfer to manage their finances. 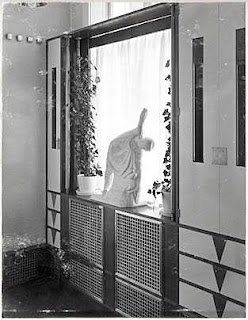 The wealthy Waerndorfers already owned a home, so they commissioned Hoffmann and Moser to redecorate it in the new style.  (They, along with the Wittgenstein family, were major patrons of the group, accounting for almost a quarter of  its early sales.)  Just inside their front door opened, the entrance hall displayed the harmonious Hoffmann style, its blend of ideal squares and parallel lines.    On a pedestal there was the first of sixteen sculptures by the Belgian George Minne, a Waerndorfer favorite.  Fritz Wearndorfer was the first owner of Minne's most famous work, The Fountain of Five Kneeling Boys (1898), exhibited by the Secession in Vienna 1900 and now in the collection of the Fine Arts Museum of Ghent, Minne's hometown.  Another work by Minne,  the marble Le Macon or The Bricklayer, was displayedin the Waerndorfer's  Galerium. 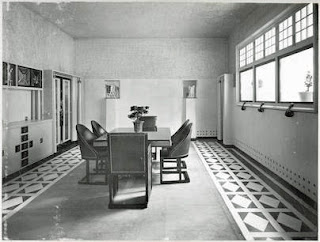 These photographs from the Wiener Werkstatte Archive demonstrate how a home could be adapted to the 'total work of art' aesthetic. Notice the contunation of the diamond patterned framing of the floor, the same pattern used in the entrance hall. One thing you can't see in this photograph of the Waerndorfer dining room is the revolutionary 'flat' silverware set designed for them by Hoffmann.  It became the talk of Viennese society.
was hung 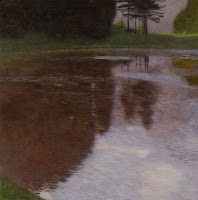 Gustav Klimt's Still Water. Park At Schlosskammer was hung prominently next to the fireplace in the living room.     At this distance  we may see nothing daring in a landscape but Hope I, another of the Waerndorfer Klimts, still has the power to startle.  The Waerndorfers knew the artist and were among his most consistent supporters, regardless of his numerous affairs and out-of-wedlock children.  They knew when they purchased the painting that woman portrayed was Mizzi Zimmermann, Klimt's mistress and that this was not her first pregnancy.

Managing the finances of the improvident Wiener Werksatte members was always a thankless job.  Under pressure from his family to avoid the disgrace of  economic ruin,  Fritz Waerndorfer finally declared bankruptcy in 1913, losing both his and Lili's combined fortunes. The couple then emigrated to the United States in 1914.  Waerndorfer worked as a farmer and  then, the man who had owned textile factories,   became a designer for a textile company.  Fritz began to paint and his pictures were exhibited  in 1927 at the Neue Gallery in Vienna.  The gallery's owner Otto Kallir re-established himself in New York City in 1938, after fleeing the Nazis.  Today, the gallery continues,  run by Kallir's  granddaughter and former business partner under the name Galerie St. Etienne.
The Waerndorfer art collection has not been so fortunatley preserved.  Just as, a generation later, the collections of many Austrian and German Jews would be left behind or looted by the Nazis, the Waerndorfer collection  had to be dispersed for financial reasons.  If there had been a way to preserve it intact, it would be one of the premier showcases of  the Wiener Werkstatte.
Note: Speaking of showcases, the Waerndorfers had  a showcase specially built for Klimt's Hope I in the private gallery in their home.  According to the authors of The Naked Truth (Prestel Verlag: 2008), although the painting was kepy behind locked doors, Lili Waerndorfer frequently displayed it to her guests.

Tania, I saw this brooch in person at the Neue Galerie. It is not large but it makes a large impression. Gorgeous!

So timing might be serendipitous, but timing is everything :) Thank you.

How sad that the collection was dispersed.

Rouchswalwe, sad but this became a terribly common occurrence during the Nazi period. The Gallia collection from Vienna was also dispersed, but some of it did end up at the National Gallery of Victoria in Melbourne, Australia. The Henneberg residence in the Hohe Warte section of Vienna was severely damaged during WW II. And that's just off the top of my head.
Fortunately, at this late date, the Neue Galerie in New York City is giving us the chance to see Secession and Werkstatte works that landed on U.S. shores.

Thank goodness someone had the foresight to rescue the Margaret Macdonald Mackintosh Gesso Panel frieze "THE SEVEN PRINCESSES" (based on a play by Maurice
Maeterlinck),
which sat in the Charles Rennie Mackintosh music salon in the Waerndorfer house,sadly nothing else survived of the music room. (Rumor is that some child chopped and burned all the Mackintosh furniture,)The gesso panels were hidden behind a false wall in the basement of the MAK museum in Vienna, and there it stayed until being discovered in the 1990s.
It now hangs in the museum and is absolutely breathtaking,go and see it, it's worth the trip..........

What a close call! Who knows what still remains in the basement ? Even museums don't, apparently. One of my regular readers just returned from a trip that included Vienna. I'd love to see MAK but I'll never be able to afford a trip like that, so thanks so much for your comments.

I stumbled upon this interesting article. I am one of Fritz and Lili Warndof's great grandchildren. I'd love to hear from the author of the article or anyone else with information about my grandparents.

Hello and Welcome, Charlie's Kid.
"Wiener Werkstatte" by Gabriel Fahr=Becker) published by Taschen Books, was very informative and it led me to other sources from there. What interesting lives these people led.
Hope this information is useful. Thanks for visiting!

I'd love to hear more about that rumor. Please share if you're able.

I hope this link works for you. It is an article in "Artnews" from November 14, 2017. It says that the catalog raisonne of Egon Schiele's work is or soon will be available online. The Portrait of Miss Waerndorfer is in a private collection so the catalog may answer your question. Good luck with it. Do let me know if you find an answer!
I still regret that my mother told me stories about her family when I was quite young but by the time I was interested our relationship was tense and she rook the position that these people were her family, not mine. Sad. Much good luck to you in your researches.

Beth, much of my information came from a book "Sonia Knips In Die Wiener Moderne" by Manu von Miller, published by Verlag Christian Brandstatter in 2004. Yes, it is in German. I don't speak German but, having studied French for years, I spent a weekend with Cassell's German -English dictionary and the book. Those compound nouns in German are real mind-benders! There was no way to link or footnote it that I could figure. I didn't try to over-interpret and I can't remember more than what I wrote at this point. Again, so lovely to hear from you.