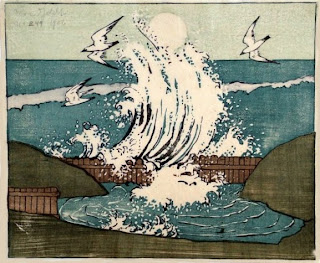 Birds visit the Atlantic coast at every season.  The Great Atlantic Flyway lives up to its name as a vast avian migratory route between the Arctic and the Caribbean.  Like the fish in the water, birds know that there is an important but invisible line separating the warm Atlantic from the cold one, and that the line intersects the shore near the outermost point of Cape Cod.  In August, if the ocean temperature off the Maine coat reaches the low 60s Fahrenheit, it is considered warm.
People, on the other hand, divide themselves into summer people and  locals.  The locals are the ones who refer to shore birds as Waders, because that's what they do along the shore.  When I was a little girl  in Newburyport, the birds were my beach mates  The birds regarded my approaches warily but seemed willing to share the beach with me as long as I obeyed their rules, which seemed to boil down to doing nothing to startle them. With literal-minded certainty, I never questioned that Crane Beach was named for the birds, but historians of Ipswich, Mass.  know differently. Just across the inland sound, Plum Island, known officially as the Parker National Wildlife Refuge, stretches down the shore from the mouth of the Merrimack River at Newburyport to Ipswich.  The birds, it seems, needed a place of refuge from us. 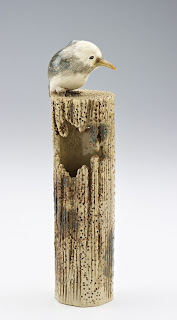 "The roaring alongside he takes for granted,
and that every so often the world is bound to shake.
He runs, he runs to the south, finical, awkward,
in a state of controlled panic, a student of Blake.
The beach hisses like fat. On his left, a sheet
of interrupting water comes and goes
and glazes over his dark and brittle feet.
He runs, he runs straight through it, watching his toes.
--Watching, rather, the spaces of sand between them
where (no detail too small) the Atlantic drains
rapidly backwards and downwards. As he runs,
he stares at the dragging grains.
The world is a mist. And then the world is
minute and vast and clear. The tide
is higher or lower. He couldn't tell you which.
His beak is focused; he is preoccupied,
looking for something, something, something.
Poor bird, he is obsessed!
The millions of grains are black, white, tan, and gray
mixed with quartz grains, rose and amethyst."

- The Sandpiper by Elizabeth Bishop, copyright by Farrar, Straus & Giroux.

In 1906, B.J.O. Nordfeldt spent the summer in Ipswich.   This immigrant from Sweden had already studied print-making with  Frank Morley Fletcher in England.  What drew Nordfeldt to Massachusetts was the chance to work with the great artist and teacher Arthur Wesley Dow.  Dow had opened a summer school in his hometown of Ipswich in 1891 and, fifteen years later, Nordfeldt  joined a class that numbered about fifty students each season.    While their works were extensions of the ukiyo-e prints of Japan, those Yankee  birds  exerted a hypnotic pull on Nordfeldt's imagination. 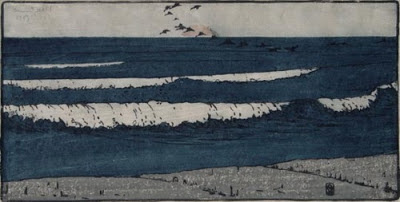 How delightful to find this much loved EB poem here today, Jane. And just right. You and Elizabeth share something of the same attentiveness toward life, I think. Perhaps is has something to do with a childhood spent watching "the Atlantic drain rapidly backwards and downwards." Wonderful post.

Oh! I love this post! I have two top dream trips ... one to go all the way out west to see the Redwoods and Sequoias, and one to go to wader territory!

Tim, thanks for the kind words. It feels totally inadequate to the subject, knowing how much more there is to it. The Newburyport-Ipswich area and Plum Island is magical. Having your parents decide to move there is the best luck a child could have. (We moved there when I was three years old.) When people who have only visited the area hear that I lived there, you can see them take a closer look at me - this privileged being. How lucky I was.

Rouchswalwe, you must visit the North Atlantic coast! If you can, come in May or June, before the "tourist" rates go into effect. Or after Labor day, if you are an autumn person. But be warned, so many people drive around looking at the foliage that your car will be reduced to a creep.