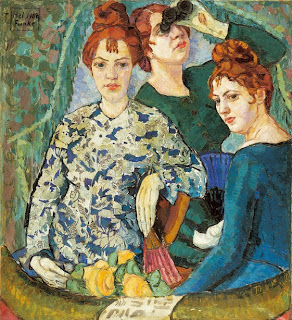 Is In The Loge  a tribute by the Austrian Helene Funke (1869-1957) to another expatriate artist  in Paris, Mary Cassatt, who painted a similar scene with the same title?   This is just the first of many unanswered questions that come to mind while looking at this artist's accomplished but seldom reproduced paintings.
As recently as 2007 for a exhibition Vienna-Paris: Van Gogh, Cezanne, And Austrian Modernism 1880-1960, held at the Belvedere Gallery, Matthias Boeckl  wrote mistakenly about Funke and her contemporary Broncia Koller that "neither artist had the possibility of showing her work in a public forum - not even at the Secession ..."   Wrong in every conceivable way.  Funke had exhibited with the  Hagebund and with other local groups.  Before that and unlike most of her Viennese contemporaries, she exhibited her work in Paris, with Matisse and  the Fauves in 1907 and again 1908 and she is listed in  catalogs of the Salon d'Autuomne and the Salon des Independents. 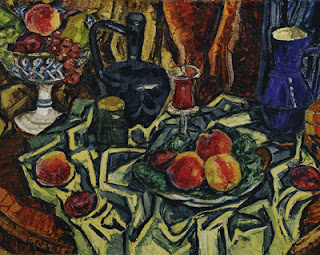 Funke  arrived in Paris in 1905 and lived for some time at 27 rue des Fleurus, in the same building where Gertrude Stein and her brother Leo lived.  The Steins opened their art collection to viewers on Saturday evenings, a collection that included such new artists as Cezanne, Gauguin, Renoir, Picasso, and Matisse.   There, Funke found what she had come for.
Still life painting had been around since the days of the Roman Empire, but it came into disrepute when too many women took it up and became too good at it. For Helene Funke, still life was a genre well-suited to her interests in form and color.   Griselda Pollock, in the ground-breaking study Old Mistresses (1982) didn't have to look very far to unearth Maurice Grant, an art historian who wrote in 1952 that "flower painting demands no genius of a mental or spiritual kind. but only the genius of taking pains and supreme craftsmanship."    Was he oblivious to the use of still life  in 20th century art? 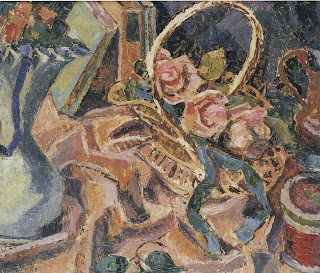 Funke exhibited with Vienna Hagebund  in 1911, where her paintings were considered too revolutionary by Austrian critics, still struggling to digest the new art of the previous decade.  No one uttered a word about delicacy or small gestures then.
But Funke's work was much more than a conduit between avant-garde Paris and Habsburg Vienna.  Her expressive brushwork may remind the viewer  of Van Gogh but her experiments with forms are analogous to what was being done by the avant-garde composers she knew in Vienna.  Her Still Life With Rose Basket takes an acceptable subject for a woman and turns it into intertwining arabesques,  She constructed  Peach Still Life with the fruits at the center of  concentric yellow and green waves, that the eye gradually resolves into crinkles of fabric. 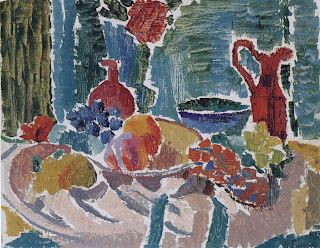 Funke used still life to explore color as though it were the subject of a painting, never more obvious than when she left white spaces between colors in Still Life With Fruit And Vessels.  The separations are not technically necessary as they are in wood block prints....
More than anyone else in Vienna, Funke was the artist who  engage with the often invoked names of Manet and Van Gogh.   In Vienna, women were the artists who worked as modernists but men became the modernist heroes, by an all too familiar slight of memory. Although Funke remained physically safe in Vienna during  World War II, her art was "'disappeared' as degenerate during the Nazi era.  Almost all the of Funke's personal papers  were lost, yet another casualty of the war. 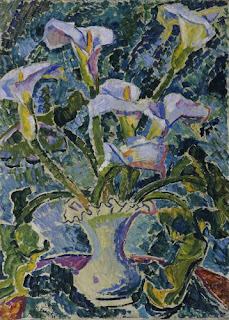 I saw two "Loges" by Mary Cassatt at Musée d'Orsay last year (L'impressionnisme et la mode) but another painting could inspirate Helene Funke "In the loge", a picture here :
http://commons.wikimedia.org/wiki/File:Cassatt_Mary_The_Loge_1880.jpg
Helene Funke, a painter to discover for me. Thanks, Jane.

Thank you, Tania, for the information. Renoir also painted a similar theme, so I guess it was a popular subject at that time. Somewhere on the internet, there may be a website devoted to watching!

Thank you so much for another great post. I love learning more about women artists.

Joanne, me too. It wouldn't be so much work to find these things out if men didn't have blinders on. (Pause here for bad pun on Mitt Romney's "b[l]inders full of women.")