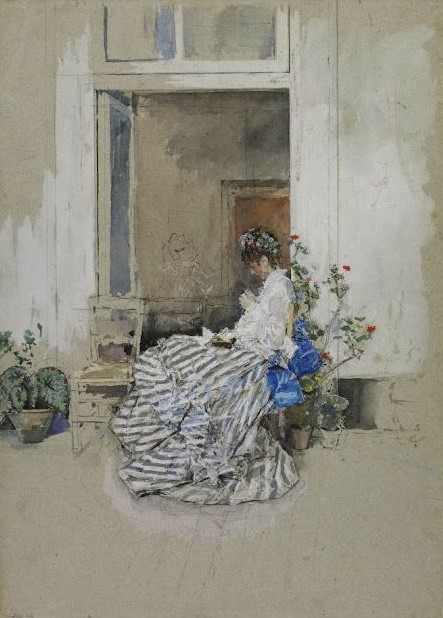 From the corner where you sit,
Look out at the light,
The grass and trees and mossy
Stone in the arbor

That measures time in the sun,
And the water lilies, tufts
O f dream on the motionless
Water of the fountain.

Above you, the translucent
Folds and pleats of the leaves,
The pale blue of the sky,
White clouds.

A blackbird sings
Sweetly, as if the voice
Of the garden were to speak to you.
In such a still hour

Use your eyes well, look
As if you gently touched
Each thing.  You owe thanks -
For such pure calm

Free from pleasure or pain -
To the light, for soon.
It will go, as you will.
In the distance you hear

The deceptive treed
Of time, moving
Toward the winter. Then
Both your meditation and this

Garden you contemplate,
Transfixed by the light,
Must lie down in a long
Sleep, mute and dark.
- "A Garden" by Luis Cernuda from Selected Poems, translated from the Spanish by Reginald Gibbons, Berkeley, University of California Press: 1977.

The longer you look at this seemingly modest painting the more amazing it becomes.  Cecilia de Madrazo is a portrait of the wife of the artist, recording a quiet moment of domestic life - but with what panache. The clarity of the composition is breathtaking: the woman sits facing left with a chair and the curving line of a tall potted rose bush bracketing her figure. Her white blouse as the setting for her head is muted in contrast the artfully executed billows of her striped skirt, evidence of Fortuny's masterly draftsmanship. The background is rendered in delicate washes of watercolor;  Fortuny was the pre-eminent water-colorist of his day.  The richness of a small perfect moment is captured, lest we overlook life's sweetness in our hurry from one moment to the next.

In August 1874, three months before he died, Mariano Fortuny wrote, "Now I can paint for myself, the way I like, as I please...It is what gives me the hope of showing myself as I really am."  The Spanish artist and his family were spending the summer in Portici, a beach town near Naples when Fortuny contracted malaria.  He died in Rome from a stomach ulcer that hemorrhaged.  Mariano Fortuny y Marsal (1838-1874) was only thirty-six years old but he was already an artist with an international reputation, his works in museums and private collections across Europe and North America.  His admirers sensed that he was on the brink of doing some great new thing when he died.  Today his reputation has been overshadowed by that of his son Mariano Fortuny y Madrazo (1871-1949), a Venetian textile designer but a renewed interest in Spanish art is the occasion for another look.

His contemporaries adored Fortuny's work, Vincent Van Gogh and the Americans John Singer Sargent and Thomas Eakins notable among them.  Pablo Picasso, a fellow Catalan, admired Fortuny for patriotic reasons as well.  Fortuny was a collector of art and fearlessly hung his collection in his studio, interspersing works of the past with his own  to create a personal aesthetic environment.

Mariano Fortuny  was orphaned at the age of six and thereafter raised by his grandfather who supported the boy's artistic talent through a small stipend from the local church.  Antonio Bassa, a silversmith and painter of miniatures taught Fortuny the value of thoroughness in art.  His grandfather accompanied him to Barcelona where Fortuny began his formal art studies in 1852. Then, in 1858, he won the coveted Prix de Rome, an award that changed his life.

In Paris, center of the art world in the late 19th century and home to a growing and influential bourgeoisie, Fortuny achieved fame.  Writer and critic Theophile Gauthier's praise of Fortuny's work  opened doors to the young Spaniard,  leading to an exclusive contract with the renowned art dealer Adolphe Goupil. Fortuny had recently married Cecilia de Madrazo, daughter of the director of the Prado on Madrid and together they made an impressive couple.

The bourgeoisie fell in love with Fortuny, the scholarship boy from Tarragona, a self-made artist who rose from humble beginnings to achieve worldly success.  In his good fortune they saw their own values reaffirmed, their social virtue in allowing  him to succeed validated their conformism and negated their narrow-mindedness. The grandson of a cabinet maker was lauded by the international art world as a complete artist -  his virtuosity with oil paint revealed new ways to portray light on canvas, his agile draftsmanship was the foundation for his self-assured handling of watercolor that renewed the medium in Spain, France, and Italy, and his compatriots considered Fortuny the finest intaglio print-maker since Goya. 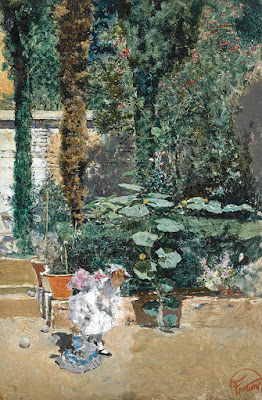 Popularity had its drawbacks: Fortuny grew tired of painting the formulaic orientalist works that were all the rage at the time, work that he found increasingly shallow.  And if we look at those pictures now we can  see his wisdom that they  were blocking his development as a painter.  Fortuny also felt hemmed in by  very narrative that made him so attractive to many patrons.  With some relief, the couple moved to Granada in 1868 where they settled in the Washington Irving Hotel at the Alhambra.  The importance of the Alhambra in garden history would be  hard to exaggerate. For Fortuny it was truly a heaven on earth.

The gardens of Spain are richl in history, combining designs from ancient Persian and Roman gardens with more recent Islamic additions from the time of Moorish Spain and Andalusia.  The 'paradise garden' is organized around a central axis with paths radiating out in the four cardinal directions. Sun and heat, the basic elements of the Spanish climate, are tempered by the coolness and humidity of fountains and watercourses.  Fortuny painted it all with clarity and spontaneity, no small feat.  You have only to compare his work with that of another Catalan painter Santiago Rusinol (1861-1931) whose vivid landscapes are relatively stiff and unconvincing.

Fortuny's late landscapes are anything but stiff, they brim with light and color. Beach at Portici, unfinished at the time of his death, was so highly regarded that it was hung prominently in the American Pavilion at the 1893 World Columbian Exposition in Chicago.  Alexander Turney Stewart, a New York collector, had purchased the painting in 1875, knowing it a work in progress.  The concentration of detail in the background trees and beach juxtaposed with the free brush work of the foliage in the foreground could hardly be improved on for overall effect.  The wall nicely defines the space around the human figures enjoying their leisure on a sunny day.  An unusually large painting for Fortuny, its relatively broad canvas provided scope for his extraordinary capacity for expressing the beauty of the ordinary. 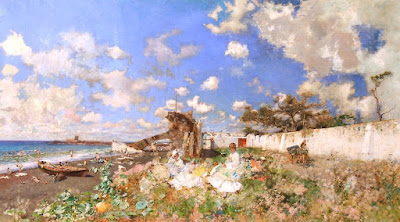 In the United States Fortuny's paintings are in the collections of the Museum of Fine Arts, Boston, the Walters  Art Museum in Baltimore, the Corcoran Gallery in Washington, D.C., and the Hispanic Society of America in New York City.

The poem "A Garden"  is exemplary of Luis Cernuda's writing.  For him, the natural world was indivisible from the human perceiving it, not anthropomorphism but something more subtle.  In the same fashion, the speaker in the poems, the "I," was Cernuda the observer, not the ego.
Luis Cernuda (1902-1968) was the most cosmopolitan of modern Spanish poets; he immersed himself in the French surrealist poets, the English Romantics by way of Goethe, and American literature.  Cernuda was born is Seville but moved to Madrid, the center of Spanish literary culture.  By contrast, the Catalan city of Barcelona where Fortuny had gravitated as a young man was the birthplace of modern Spanish art.

Social life in early 20th century Spain was a melancholy spectacle,  constricting, valuing conformity above all other values.  Cernuda could be fearsome in his denunciations of the bourgeoisie, as in these. lines from "Remorse in Black Tie:" ("A gray man walks the foggy street./No one suspects.  An empty body,/ empty as plains or sea or wind:/ Harsh deserts under unrelenting sky.")

Cernuda lived  most of his adult life in exile, a poete maudit, whose songs went unheard in the wilderness. Solitary, anti-religious, and homosexual, Cernuda preached against the church while employing their own symbolism to mock them.   He rejected their rigid morality in hope of a more organic one. I hope this taste of the flavor of Cernuda's work encourages readers to search out his poetry.

I’ve seen very few paintings by Fortuny. Thank you for that presentation, Jane.

You are welcome, Tania. There are quite a number of Fortuny paintings in the United States but many more at the Prado in Madrid. Perhaps you can go to see them there some day.