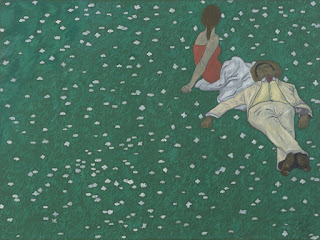 Separated by thousands of miles, almost a century, and different art histories, these two paintings present a  charming commonality.
Two young people are relaxing together on the grounds of the Brand Library in Glendale, California.  The Brand is no ordinary public library; it is a center devoted to music and the visual arts and the man in the picture is the artist who painted it, Honor Titus.
The young African-American artist Honor Titus (b.1989, Brooklyn, NY) exemplifies what critic Holland Cotter has in mind when he encourages artists to explore several media, to not put boundaries around their imagination but to bring several "spices" to the table.  Titus brings his experience with punk rock music, poetry, and acting, to his painting  So it seems apt that his painting reminds viewers of the Nabis, a group of late 19th century French artists, who embraced a capacious and expansive definition of art that included decorative screens, murals, theatre sets, posters, and book illustrations.  Titus shares their disregard of  straight-laced categories. 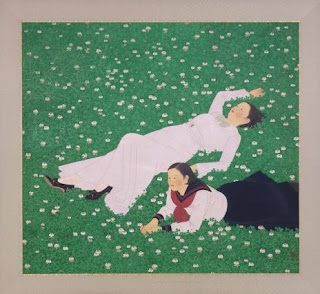 Two young girls relax in a flower-dotted field, their poses are informal  - one dressed in a middy blouse rests on her elbows while the other sprawls casually.  Together they present a picture of modern Japanese womanhood, self-possessed and at ease in the world.
Tateishi Harumi (Hariyoshi), was born in Saga Prefecture, Japan in 1927. He first studied Western-style oil painting in Tokyo when he was nineteen;  apparently he disliked the smell of oil paints so he apprenticed at a studio where he practiced Nihonga, a refreshed version of the traditional Japanese style in painting.
Harumi was one of the major figure painters of the Showa period in Japan. His specialty was  bijinga or the painting of beautiful women, long a prominent theme in Japanese art. Unlike his predecessors, Harumi's interest focused on  modern customs, "those things that come from within..." (the Director of the Mejuro Gajoen Museum).
Harumi died in Kanagawa prefecture on April, 27,1996 at the age of eighty-five.
Umages:
1, Honor Titus - Grounds of the Brand Library, (Glendale) - 2020, oil on canvas, Timothy Taylot Gallery, NYC.
2, Tateishi Harumi - Clover, 1934, colored ink on paper, Boston Museum of Fine Arts.
Posted by Jane Librizzi at 2:47 PM

I really like this connection. Thank you, Jane - waiting for spring.

Tania, when I saw the work buy Honor Titus, I remembered seeing the Japanese work at the Boston Museum of Fine Arts vividly but it took me a while to find it online because I did not remember the maker's name. The two really speak to each other, don't they?