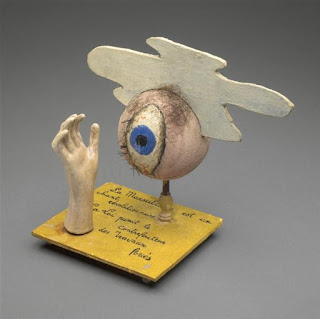 We think of assemblage as an art form of the 1960s but  Object by the French artist Claude Cahun dates from 1936. Typically her assemblages were ephemeral and made only to last long enough for her partner Marcel Moore (given name Suzanne Malherbe) to photograph them. Object is the only three dimensional work that still exists as Cahun created it.

Nothing Cahun used in the making of Object was left in its original form. A painted tennis ball became  the tilted eye. For the surrealists the eye symbolized  inward-looking, made popular by psychoanalysis. Cloud-shaped white wood hovers behind someone's real brown hair that Cahun glued on.  A hand that  originally belonged on a department store mannequin appears to have written the words on the yellow board.

The words written on the yellow base are their own an assemblage. "The Marseillaise is a revolutionary song, the law punishes counterfeiters with forced labor." (English translation)  The first is a slogan used by the anit-Fcsist Popular Front, winners of France's 1936 legislative elections, the second is warning that appears on Belgian currency.  The references are ambiguous;  Cahun was dissatisfied with the Surrealists for their lack of political involvement  and questioned the commitment of the Popular Front groups

Cahun (1894-1954), whose given name was Lucy Schwob, took part in two Surrealist exhibitions the year of Object, one in Paris and the other in London.  She was also one of many who attracted the ire of the irascible Surrealist Andre Breton. She created her works for herself and had no interest in fame.  Lost from view after her untimely death, Cahun's work was only rediscovered in the 1990s by a generation  who found simpatico in her fluid identity. "Shuffle the cards. Masculine? Feminine? It depends on the situation. Neuter is the only gender that always suits me."