Norman Lewis: On The Path To Abstraction 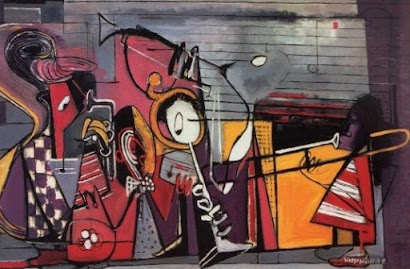 Words don't adequately express my delight in the figure of the little in the striped dress playing the trombone, the trombone that is longer than she is tall. Part of the fun of lookin at Jenkins Street Band is in picking out the musicians and their instruments. I see a cornet player, a trumpeter, and a saxophone player wearing a wild checked jacket. That could be another musician wearing the polka dotted bow tie or it could someone holding a collection box.

During the 1940s the painter Norman Lewis was moving from the social realism he had practiced in the 1930s toward the new thing: abstraction.  Doubtful that overt commentary would bring about change and believing that "The goal of the artist must be aesthetic development,"  Lewis used gestural drawing (seen here in Jenkins Street Band from 1946) to make the transition. You can almost hear the improvisational playing of these street musicians through  the ease and freedom of line in Lewis's drawing.

Street bands were a common sight in Harlem where Norman Lewis grew up.  The child of immigrants from Bermuda, Lewis (b.1909) was always keen on art but the family's resources went to Norman's older brother's music lessons. Saul Lewis would eventually play with the Count Basie and Chick Webb bands. Harlem in the 1920s was a mecca for the well-to-do (white) downtown crowd lured by the hot new jazz. that played in storied venues like the Cotton Club and Small's Paradise.  But there was no shortage of music on the street, of locals who wanted to play and those who wanted to listen. You didn't need to have money to hear music in Harlem.

To read more about Norman Lewis

Posted by Jane Librizzi at 5:10 PM