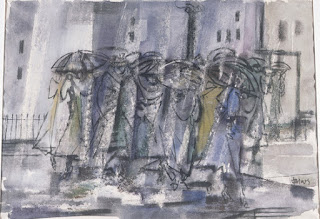 "I don't care how God-damn smart

these guys are: I'm bored.

and there's nothing to do."

- "At the California Institute of Technology" by Richard Brautigan, January 1967

Richard Brautigan (1935-1984) is remembered today as a novelist, and an experimental one at that, but he began his writing career as a poet in the 1960s.  Brautigan was appointed  Poet in Residence for the spring semester in 1967 at the California Institute of Technology.  As you can tell by reading this poem, he was not favorably by impressed by the weather in Pasadena.  An odd sentiment for someone who came from Tacoma, Washington. But rain in winter seems more depressing somehow than spring rain; the earth stays inert and dull looking. The palette Richard Haines uses for Winter Rain is drab, with only touches of blue and yellow to underline the vertical displacement that figures seen through rain take on.

Rain is one of several subjects  Vincent van Gogh painted over and over, as though the subject was inexhaustible, as it was for him. There are van Gogh rain paintings that I would do without.  His shoes were another favorite subject and I have linked to my earlier post about Vincent's love of books  and the ways he included them in paintings.

The arrangement of the figures in Winter Rain comes from  the years Richard Haines worked on  W.P.A. mural projects during the 1930s.

Richard Haines (1906-1984) was born on a farm in Iowa and began working as an illustrator for  greeting cards and calendars before formally studying art at the Minneapolis School of Art.  While there Haines became interested in painting murals ( a popular medium in early 20th century America), winning a scholarship that took him to the Ecole des Beaux-Arts in Paris in 1933.  Moving to Los Angeles in 1941 to work in an aircraft factory, he stayed after the was ended to teach at the Chouinard Institute of Art and later headed the painting department at the Otis Institute.  His work itself as well as influence on his students.is evident all around the city.

Posted by Jane Librizzi at 4:06 PM

Sometimes the rain makes tap dance,
sometimes we sing in the rain,
often we miss the blue of the sky...
Let's go to Van Gogh.

Tania, thank you for this! It's another type of rain.