Emma Amos: The Artist As A Young Woman 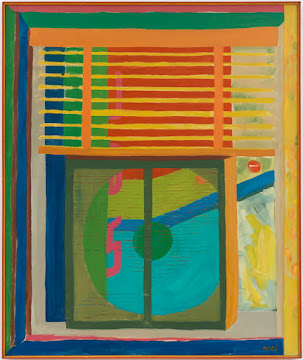 "All the little children loved the things that I drew and I did masses if paper dolls and things. And then it got rally serious and people thought 'oh, she can really draw. So, they gave me things to copy ... they gave me everything that was going, coloring books and things to copy."
- Emma Amos to Al Murray in an interview for the Archives of American Art at the Smithsonian Institution, October, 1968.
When she was twenty-three Amos moved to New York from Atlanta, having found the southern city's art scene too sleepy for what she aspired to do with her art. As it would turn out, sleep was not something Amos would be getting for the next several years.  By day, Amos worked as a textile designer, by night she studied full-time for her Master's Degree at New York University, and on the weekends she painted.
While she was at it, Amos became the youngest an sole female member of the African-American art collective Spiral, a group that had been founded in 1963 by Romare Bearden and Norman Lewis. to name but two of the fifteen members. In the 1970s  Amos became involved in the production of the feminist arts journal Heresies  and was an original Guerilla Girl in 1985.
If thinking about this makes you tired, I know the feeling. Because I spent my twenties working full-time during the day, going to school full-time at night, spending my spare time engaged in feminist and other political activities. Up at 6:30 each morning and returning from classes at 11;15 at night.
First Avenue Window comes from this early period in Amos's career.  Spiral had rented a downtown space on Christopher Street in 1965  for its first and only exhibition in May of 1965.  Shortly after, the group disbanded.  Although the artists conformed to no one style, we can see in this painting by Amos an eclectic and even irreverent approach to abstraction.
Amos had been resistant to being categorized as a black artist, as bell hooks would  note in 1993, "[That] little girl who was dreaming of being an artist wasn't thinking, 'I'll grow up and be a Black woman artists,' but "I'll grow up and be an artist." And yet, in New York Amos was rebuffed by the (male)art scene as a woman; a rude shock for a young artist who had grown up in a middle-class family in Atlanta where people like W.E.B. Dubois and Zora Neale Hurston were frequent guests.
Amos died from complications of Alzheimer's disease in 2020 at the age of eighty-three.
Image: Emma Amos - First Avenue Window, 1966, oil on cnavs with handmade, hand-painted frame, courtesy of Ryan Lee Gallery, NYC.
Posted by Jane Librizzi at 12:54 PM

I did not know this artist, thanks Jane. Colors, movement, I admire. For example, Black Dog Blues, 1983, found on the Web.

Tania, I attended a large retrospective of Emma Amos paintings at the Munson-Williams-Proctor Art Institute in Utica, New York in June. It was wonderful and so coolorful. Glad you foun more of her paintings.