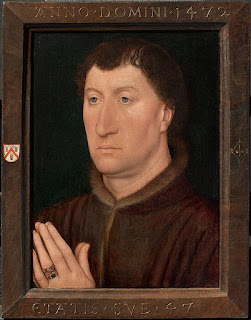 Something to think about when you look at old portraits is that they were usually the product of several sittings, providing the artist ample time to consider the nature of his subject. The conventions of Renaissance portraiture were naturalistic in some respects but truth-to-life watts-and-all was not what either sitters or patrons waned.  In Hans Memling's portrait of the cleric Gilles Joye there is no hint of Joye's worldliness and vanity. The artist gives us a conventional priestly  image: hands clasped piously as if in prayer, a face full of solemnity above a modest clerical robe.

The Canon Gilles Joye lived in what is now Belgium but he is usually described as  Franco-Flemish, having been born in the city of Kortrijk in West Flanders and then migrating to Bruges.

Gilles Joye was appointed a singer at the Burgundian court chapel in Bruges in 1462. Unsurprisingly for one so irreverent, his vocal compositions were secular,. How this man became a rector is curious; his hobbies were street brawling, patronizing brothels, and even making a prostitute named Rosabella his mistress. \He was notorious for skipping out on his singing duties but was apparently forgiven because his music was so melodic and lyrical. Admonished to renounce his girlfriend, teh wag wrote her a Mass. (O rosa bella). Notwithstanding his transgressions, when Joye died he was buried in the church of St. Donation.

Hans Memling painted in the style known as Flemish Primitive; his portraits  simplified versions of his sitters' features. Born in the Rhine region he moved around northern Europe in search of commissions. After a stint in the Brussels workshop of Rogier van der Weyden he arrived in Bruges where he  was made a citizen in 1465. There he  became a leading painter with his own workshop. and it was there he met the cleric Gilles Joye.

Image: Hans Memling (circa 1430-1494) - The Canon Gilles Joye, no date given but probably after 1465, tempura and oil on wood panel, Clark Art Institute, Williamstown, MA.

Normally the artist starts to paint a portrait at the request of the family of the sitter or by the organisation he worked with (city council, church, art academy etc). But Joye was a very naughty boy! So who was Memling's patron in this case, and was he paid in full for his work?

The fur collar, the rings, the coat of arms... Memling gives the social status of the praying character with discreet details, what sobriety in this portrait!

Hels, given Joye's large ego, he may have commissioned the portrait himself. The Clark Art Institute which owns the picture doesn't say on their website.

Tania, thank you for adding your observations to make the article better!
According to the Clark Art Institute which owns the picture, the engraving on Joye's rings is his coat of arms. His musical education was excellent so the coat of arms may belong to the Joye family.