Raoul Dufy: The Picture Stares Back 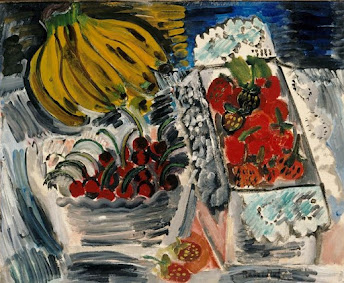 It's time to take Raoul Dufy more seriously than we usually do. We take the measure of the ills of this world by comparing them to the pleasures and happiness that are the stuff of Dufy's art.  It was in the shadow of the oncoming Second World War that he created his largest and most joyous work La fee electricite for the 1937 World's Fair in Paris, after all.
Dufy (1877-1953) was born into a large family in Normandy. He didn't begin to paint until he turned eighteen.  Inspired by Henri Matisse's Luxe, Calme et Volupte, Dufy was in the process of honing his own style when he painted this still life in 1919.
What the French call nature morte (dead nature) in English is called still life. Let's imagine what these  live  fruits are thinking. It's daunting to think that they  could judge us as we judge them, but they are alive so it's possible.  Are they nursing any grievances against their fate? Cherries are difficult to grow, easily damaged and so are highly prized. Of course they get their own special bowl  placed close to the viewer.  Bananas, at a dime a dozen, sulk in the background.  Other lesser fruits are jumbled together to the side but two strawberries are having none of this hierarchal arrangement.  They have pushed their way to the very edge of the canvas as though calling 'look at us'.
Image; Raoul Dufy - Nature morte aux fruits , circs 1919, oil on canvas, Collection of Pierre Levy.
Posted by Jane Librizzi at 1:17 PM

I have seen a lot of Dufy paintings that referred to beaches, horses, sailing, cafes etc.. he was depicting quite an active life with attractive colours. But the still lifes must have come later in his career. Boasting cherries and sulky bananas sound as if he was creating very different views of the world :)

Hels, thanks for your comment. I let my imagination run a bit wild there. Actually, late in life, Dufy painted a number of floral still lifes. He was enamored of roses.

Lots of white and grey in this still life, a renewed composition.
I hope to see the retrospective "Raoul Dufy. A passion for colour" in September (Aix-en-Provence) : https://www.caumont-centredart.com/en/home.

Tania, I look forward to reading about it at http://textespretextes.blogspirit.com/ !